Billy Gene got so big he quit the game like Dave Chappelle after season 3.

He took all his courses on advertising and video marketing from the last decade — tens of thousands of dollars worth of training — and gave them all away for $49.

Why? He wanted to reach people who couldn’t afford his high-ticket price and give them an education that could potentially transform their lives.

Then he retired from being an educator.

Now you can’t even buy his products anymore. Billy Gene is and was one of my favorite people to follow, and this year he wins my award for the most polarizing marketer in our space.

And teach you his 4-step process for selling any product, even the “boring” ones.

This clip is from Smart Traffic Live 2020. If you’d like to watch Billy Gene’s full training you can purchase the event replay here: 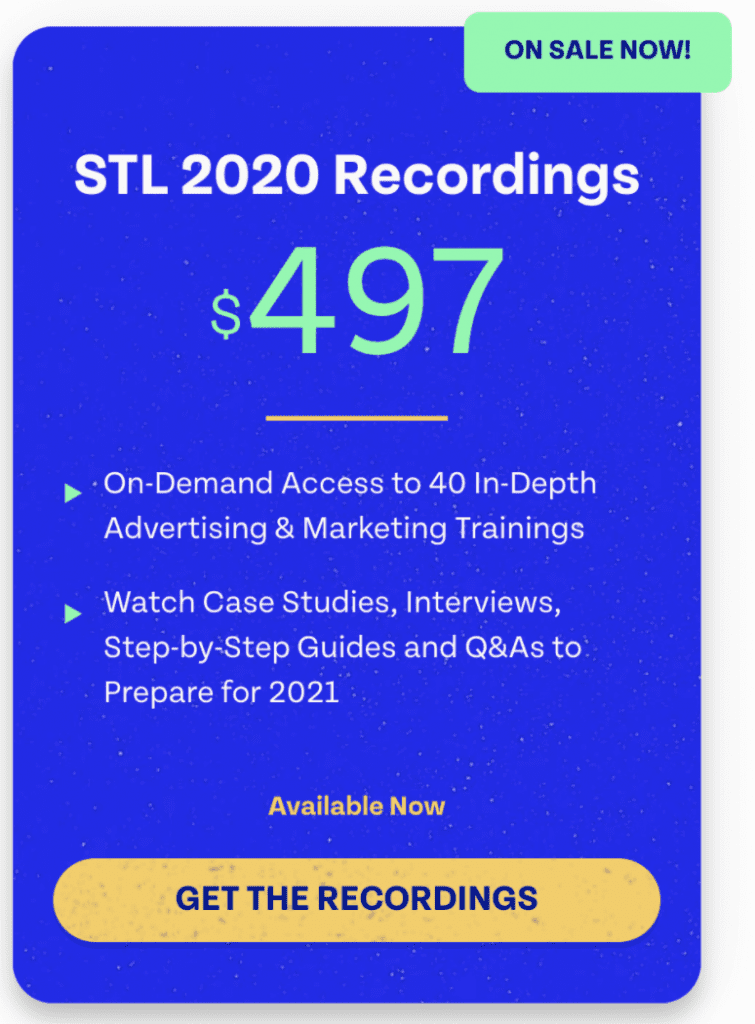 This conversation has been edited for clarity.

Ezra Firestone: You’ve always been good at getting attention. Did you make an internal decision to choose topics that were going to rile people up or did that just happen naturally?

Billy Gene Shaw: I think more people should take a stand. Think about the causes and the people you follow in your life — they almost always stand for something.

One of the best examples I love to give is Lady Gaga. When she came out, she was on some strange shit. She was wearing meat and all kinds of stuff to award shows, but at the time she was so vocal about her advocacy for equal rights of gay people, and everybody flocked to her. She was the voice.

She took a stand and that’s what I admire so much about her. She progressed things, so shout out to her.

“Anyone who takes a stand for anything will get more traction in the marketplace. The people that go unnoticed are the people right in the middle.”

“Oh, I don’t want to comment on that; I’m not necessarily red or blue…” Nobody cares about their opinion! You’ve never seen someone look up an opinion on someone neutral. It doesn’t really happen.

To me it’s just about being part of the conversation and then parlaying that into [marketing].

Lead with the conversations they’re already having.

I’ll show you an example: 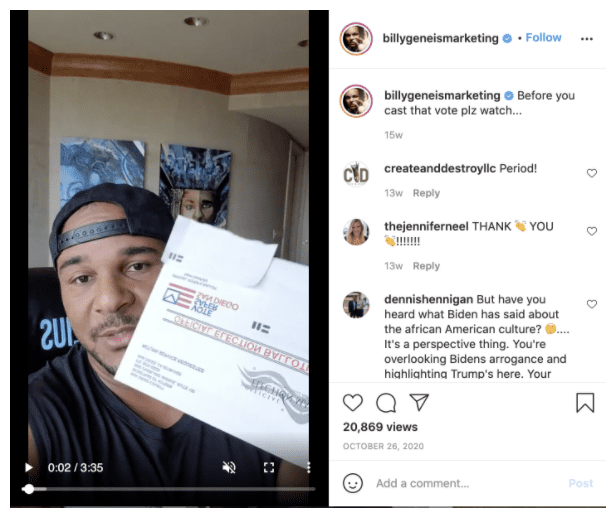 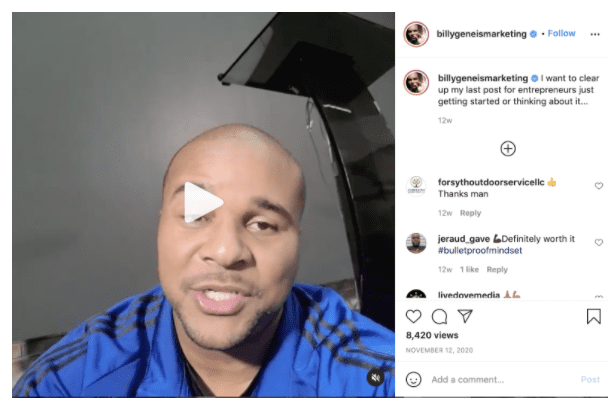 Here are two posts I made on my Instagram.

Nothing crazy, just organic videos, but it gives you an idea of how many more people you can reach just by talking about things that are relevant.

On the left you have a post with 20,000 views where I’m holding my ballot and talking about the election…

I get 10 times the amount of conversation and triple the amount of people that it sees just because I’m talking about something that’s relevant.

So you lead with what everyone else is talking about and lead with your opinion, then I always bring it back to sales and marketing.

“If you get one opportunity to get in front of people and you can say something that reaches 1,000 people versus 10,000 people, what conversation are you going to lead with?”

So for me it’s just being a smart marketer or a genius marketer and following the math.

How do you take a boring brand and add some of this flavor to it?

EZRA: Ok, so you want to be entertaining, you want to touch on what’s happening in society and pop culture, but how do you translate that into your marketing?

In other words, how do you take a boring brand and add some of this flavor to it?

BILLY: You’re right. To look at the camera and ‘turn it on’ like Kevin Hart or something like that, that requires a unique skillset that most in the world will never have.

But anyone can experience something or be entertaining.

I’ll give you a great example:

I’m standing on a stage right now as I talk to you, so let’s pretend this is a cold advertisement and that I’m super “boring” and I have no personality. (By the way, I don’t think anybody’s boring, but let’s just say that.) 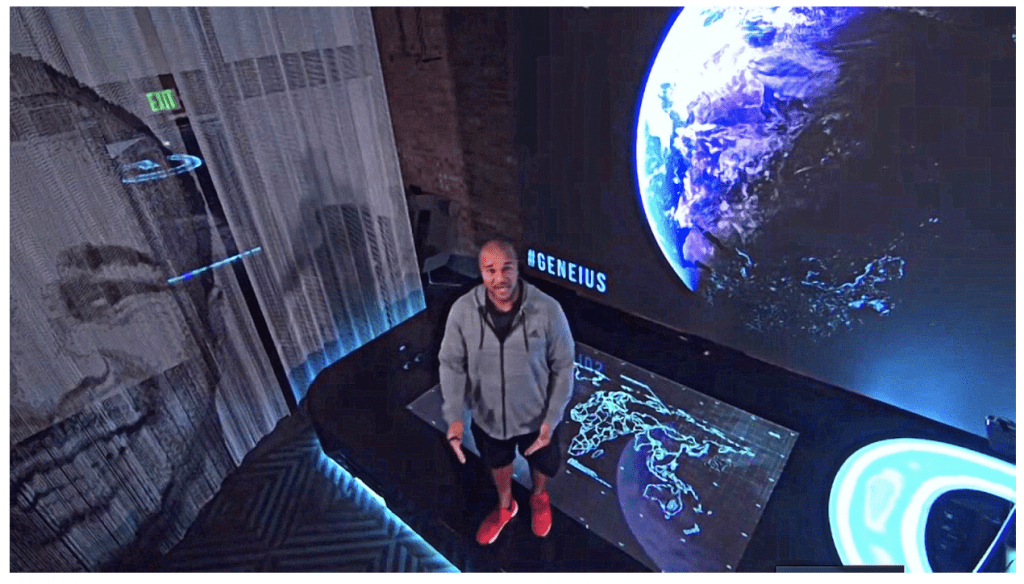 No matter if I’m boring or what I look like, is that not interesting as shit to watch, knowing that I’m one step away from living or dying?

Of course you watch.

When I look at advertisements, I think of, “What’s the story going to be?”

We’ll use a car air freshener as an example. It doesn’t matter what it is to me, because I always use the same process.

Step 1. What problems does this product solve?

You can keep going, but just from that, my brain starts to go crazy from what I can sell.

Then ask yourself, “Who cares about that problem more than others?” Probably someone whose livelihood depends on driving, like Uber drivers or Lyft employees.

If you pick someone up and your car smells like ass, you get a shitty review.

Now that problem hurts your money and they’re not giving you jobs anymore, so all of a sudden you lost your income all because your car smells bad? That sounds ridiculous.

Go into Facebook Ads Manager and under Detailed Targeting search for interests with Uber and Lyft and see what populates.

“Drive with Uber” is an audience of 1.5 million people by itself, so now I have an audience for the ad I’m going to make.

Step 4. Make an ad that speaks directly to them.

I always ask myself, “What’s an ad I can create that doesn’t cost a lot of money?”

Most people have a car, so why not just go outside and shoot a selfie video of someone hopping into your car when it smells like shit.

And that’s viral. You don’t have to be entertaining to get somebody else reacting to ass-smell in your car. That sells itself.

Then all you have to do is look at the camera and say, “Here’s the deal. If you drive Uber and Lyft, nothing’s going to get you a 1-star review faster than ass smell. Here’s an air filter to fix it. When was the last time you had yours checked, click this button and I’ll send you one.”

Or whatever it is.

That’s the same process I use. I ask myself, “What problems does this product or service sell?” and go from there.

EZRA: And to put that in a framework that I used to use at Smart Marketer back in the day for video ads:

First you open with the problem. Then you agitate the problem all crazy and talk about how bad it is, and how much it’s affecting you. And then you introduce the solution.

BILLY: Yes and what I love about what you’re saying is that so many people approach marketing as if it’s creative, but it’s really math.

“When you start approaching your marketing like a scientist, I think things go better.”

Scroll down to listen to the first interview we did together back in 2018 called, The Rise of Billy Gene: Why Boring Doesn’t Sell.

You’ll see how he launched his incredible career, and learn the same 3-step marketing formula Billy teaches in his marketing courses. 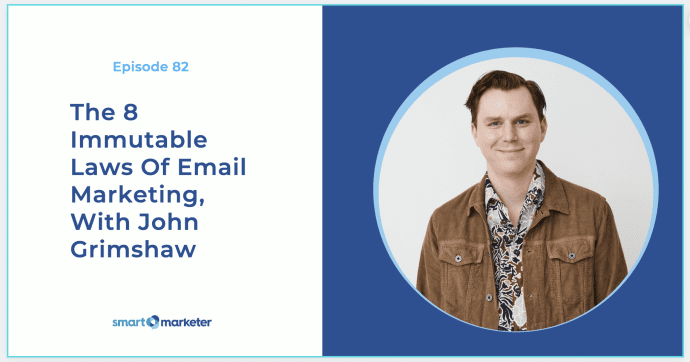 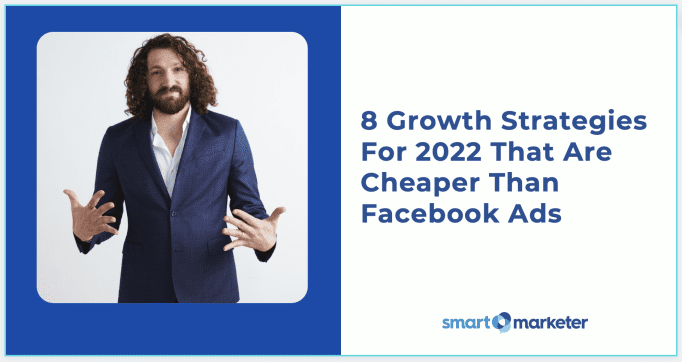 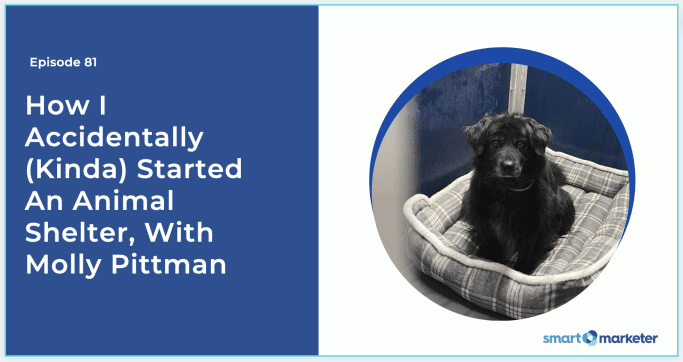