The Rise of Billy Gene: Why Boring Doesn’t Sell.

He’s the founder of Billy Gene Is Marketing, Inc. and an extraordinary video advertiser…

And in this interview, he shares how he got started, the limiting beliefs that almost stopped him and some major lessons to help you improve your ads:

Started from the Bottom

Billy Gene started in the industry by making 600 cold calls a day selling courses for an online college.

And it was the worst job he could imagine.

Even worse, his previous business of a mobile oil change service had just gone under so he was only there for the money.

And to top it off, he discovered the C.E.O. had some pretty shady business practices, so he quit the next day.

He was back to square one.

Billy Gene knew there was a future in online education; he just didn’t want to sell kids online college degrees…

So he licensed some content that helped people quit smoking and began selling it as digital courses.

And that — right then — is when he discovered how difficult it is to sell something online. No one have ever taught him that at UC San Diego.

So there he was, living at his mom’s house, with a bunch of content he couldn’t sell…

Until he found an old video on Facebook ads.

The Rise of Billy Gene

That night he set up his first video ad and made $5.00 while he slept. He was hooked.

He started learning everything he could to get better, and soon he was calling businesses and offering to set up their advertising.

He bought a cheap camera setup from Amazon and recorded a case study video about his success story.

That video led to a sales letter showing how he did it and an offer for Billy Gene to set up their Facebook ads, too.

He began taking on larger and larger clients, outperforming other marketers in the space and building a cult following.

Since then, he’s launched his own marketing education platform with over 5,000 members and taken over the big stage at Traffic & Conversion Summit.

Confidence and belief in your value is compelling to an audience…

And anyone who follows Billy Gene knows this: he speaks with bravado, experiments and is willing to be polarizing.

Personally, I think that’s why so many digital marketers like him.

But before Billy Gene was the guy you see on Facebook, he struggled for years to overcome limiting beliefs.

He felt insecure in this industry because he was a young, black, college dropout who cursed like a sailor — and his ideal clients were 50 year old white, college-educated males.

If you’re struggling with your own limiting beliefs, here’s Billy Gene’s advice to help you change your perspective:

“Six years ago there was a lot of truth to it, but there was also a lot of limiting beliefs…

…I didn’t graduate college, I was too young, I was unprofessional, I didn’t look like them, and the only thing that changed my perspective is I was so f****** good at what I did, that they couldn’t deny me.

…That’s when I realized that if you can get results: black, white, purple, yellow, green — in business people care about green more than they care about anything else.

…And I got out of this limiting belief when I started not only winning their business but becoming their friends.”

You may be surprised how similar the business models are between ecommerce and coaching.

For example, to build a lasting business in either industry, you need to start with a great product — and what Billy Gene teaches is spot on and he gets results.

But a good product is rarely enough these days. You need more:

That’s why he also entertains his community, tells a compelling story and gives away a lot of valuable content for free. Sound familiar?

It’s basically the same business model I used to grow my skincare brand to 8 figures.

And after seeing the ways entertainment has changed the info-publishing world, Billy Gene had some insights into what that means for those of us in ecommerce:

“Boring doesn’t sell. People think entertaining is optional, people think video is optional — those guys are going to be out of business in less than three years.

Even in your space, you’re seeing it in ecom, you’re going to see a huge shift in the way they’re selling their products.

All the biggest physical products that just go BOOM are videos. Dollar Shave Club wasn’t a product, it was a viral video sales letter.”

Get Their Attention, Then Educate

When Billy Gene is teaching his students how to run successful video advertising, he uses this formula:

And then he makes sure he delivers on that solution with a well-executed product.

In his experience, entertainment and curiosity are the best way to hold someone’s attention long enough to have the chance to deliver the value.

I do this same thing with Smart Marketer:

And once I have their attention I advocate for the less sexy things like integrity, communication and value.

Because even though I believe these things ultimately lead to scaling a larger business, few people would ever give me the chance to teach them if I didn’t fight for their attention first.

I hope you’ve enjoyed this post. Catch you on the next one!

Video Highlights:
4:57 Every business comes down to entertainment and engagement
6:41 It’s ok to acknowledge the truth, but not if it paralyzes you
8:03 Confidence and belief on your value is compelling
8:53 Boring doesn’t sell
10:27 A business is a group of people who are having a collective experience and are engaging in your brand through content
14:43 A smart marketer meets their customer where they are 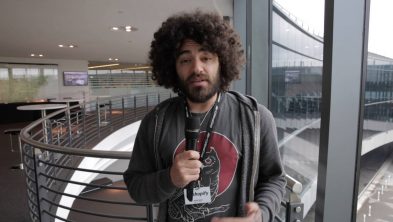 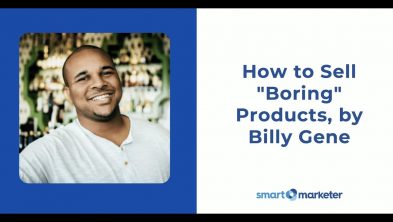 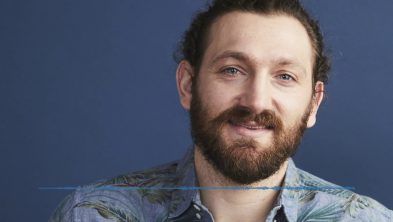